After 7 years of playing for the club, Vincent Enyeama’s contract has been terminated by French club Lille. 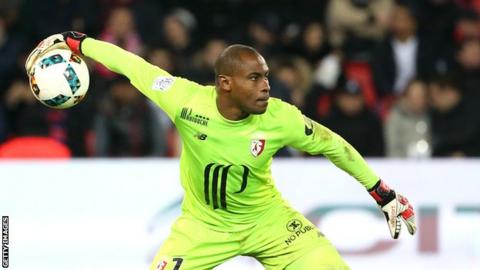 In 2014 former Nigeria captain Vincent Enyeama was the first goalkeeper to be named French Ligue 1 African Player of the Season.

The former Nigeria Super Eagles captain, Enyeama joined Lille from Isreali side Hapoel Tel Aviv in June 2011 and made 164 appearances. The 36-year old last played for Lille in April 2017 after he was told by former boss Marcelo Bielsa to look for a new club at the start of last season.

It was said that Enyeama’s contract termination was by mutual consent.

“After seven years, the adventure ends now and I can only thank the club and supporters for the amazing love,” Enyeama told BBC Sport.

Enyeama helped the club to the 2016 French League cup final where they were edged by giants Paris St-Germain. With 17 clean sheets from 35 league games in the 2013/14 season, he emerged as the first goalkeeper to be named French Ligue 1 African Player of the Season.

Lille paid a glowing tribute to the player on its website and wrote that: “Beyond his performances, Lille and the supporters will remember Vincent’s smile and enthusiasm. The club now wishes him the best in his future projects.”