An Egyptian court on Saturday issued a death sentence to 75 Muslim Brotherhood members and their supporters, including journalists, for their participation in protests following the 2013 ouster of democratically elected President Mohamed Morsy.

The court jailed more than 600 others who participated in the 2013 protest which ended with the killing of hundreds of protesters by security forces. 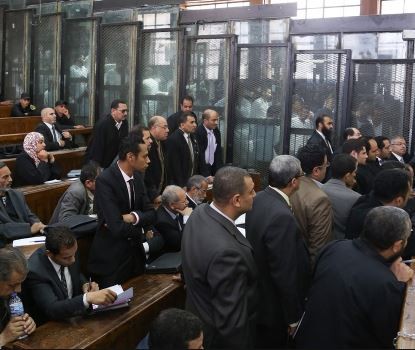 The sentencing concluded the mass trial of 739 people accused of offences including murder and inciting violence during the pro-Muslim Brotherhood protest at Rabaa Adawiya square in Cairo. The government says many protesters were armed and that eight members of the security forces were killed. It initially said more than 40 police had died.

The mass trial has been widely condemned by human rights organizations, with Amnesty International calling it a “grotesque parody of justice.”

Muslim Brotherhood spiritual leader Mohamed Badie and dozens more were given life sentences, judicial sources said. Others received jail sentences ranging from five to 15 years. Cases were dropped against five people who had died while in prison.