Daily Post
Home Africa Video: Egyptian man arrested for having breakfast with a woman in Saudi...

An Egyptian man has been arrested after a video of him having breakfast with woman in Saudi Arabia went viral on Twitter.

In the video, a man with an Egyptian dialect eats breakfast beside a womanwearing a full face veil, who many assumed to be Saudi.

This is in contravention of the law in Saudi Arabia, where in workplaces or eateries like McDonald’s and Starbucks, families and single men have to sit in different areas and women must sit separately from single men in these places.

The man was arrested by the Saudi Ministry of Labour and Social Development, who accused him of “committing several violations and taking up a post exclusively reserved for Saudis”.

The Arabic hashtag “an Egyptian having breakfast with a Saudi” has been used over 113,000 times on Twitter, where it has become the centre of a cultural divide.

In the 30-second video, the man and woman briefly joke about eating their breakfast together, with nobody else invited.

But the point which has caused the most consternation comes at the end of the video, when the woman appears to feed the man. 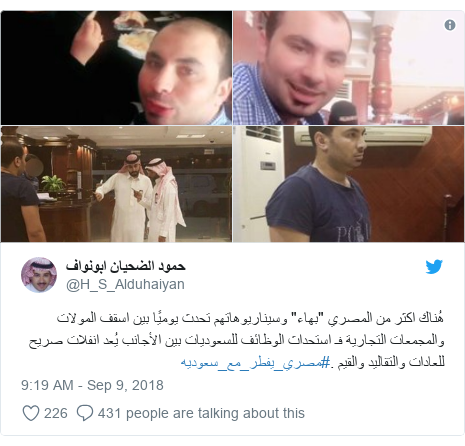 Many Saudis on social media were highly critical of both the man and the woman, with the majority of people wondering why the man was punished instead of the woman.

“I need to understand why men are constantly punished and not women,” said Twitter user Malak. “I am a Saudi [woman] and I swear I want them to punish her with him. Laughter, eating at the workplace… where are your limits?”