A single woman who became tired of being asked when she’s getting married made extraordinary decision to tie the knot to herself.

32-year-old, Lulu Jemimah, an Oxford student, was reportedly tired of her family lecturing her on the importance of settling down with the right man.

But marriage is the last thing on her mind as she studies a masters in creative writing at the prestigious university.

To get her parents off her back, she decided to stage a mock wedding and sent formal invites out to her nearest and dearest.

Lulu hired a dress, walked through the venue to the traditional wedding march and even gave a speech to her guests explaining the lack of a groom.

Lulu admits her Ugandan parents are baffled by her decision – but said she feels it was the perfect commitment to herself and her studies.

The entire day cost just £2 – for her taxi to the pub venue – as she managed to get the rest of her big day for free or as gifts from friends. 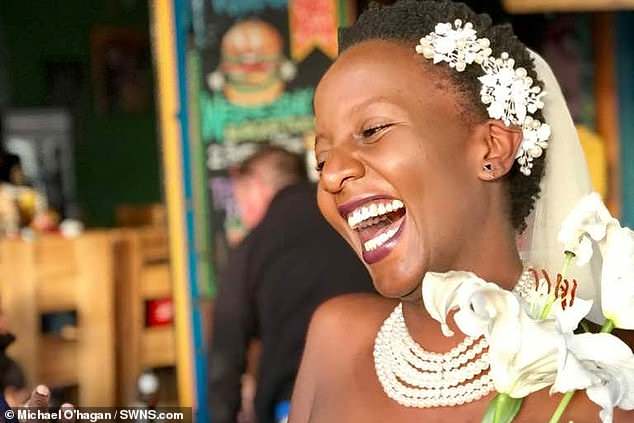 ‘I have a strong passion in life and I am committed to achieving my goals at becoming an academic.

‘But all my family wanted to ask me was when I planned to get married – which is very important back in Uganda – followed by when I would be having children and starting a family.

‘My father wrote my wedding speech when I turned 16. Every birthday my mother prayed for me and in recent years this has included a plea for a good husband.

But I just didn’t want to think about walking up the aisle. It’s not the thing which keeps me up at night.’

Lulu who previously worked as a freelance journalist and a communications consultant for the International Organisation for Migration received a BA Media (film) scholarship from Macquarie University in Australia in 2013. 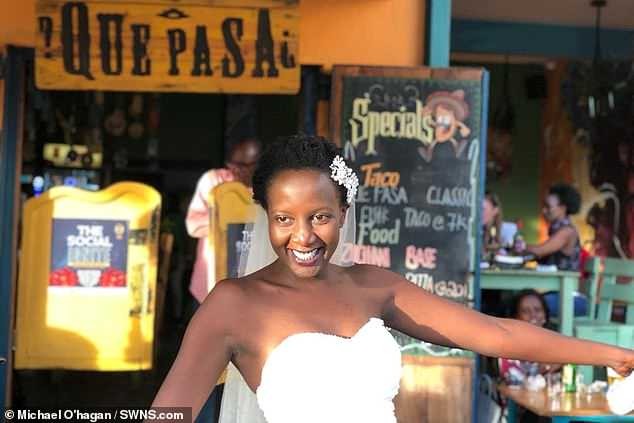 After completing her undergraduate degree, she applied to Oxford University to do a masters, which she started in August 2017.

Despite her academic achievements, all her parents wanted was for her to get a boyfriend and tie the knot, she claims.

When Lulu returned home to Uganda for her birthday in August, she celebrated her birthday together with her bizarre wedding through the help of some of her friends.

‘One of my closest friends Karin reminded me that I had a lot to celebrate this year like getting into Oxford and I joked that I would show up in a wedding dress,’ she said.

‘We had been talking about this marriage pressure and she loved the idea so much that she offered to get me the wedding gown. 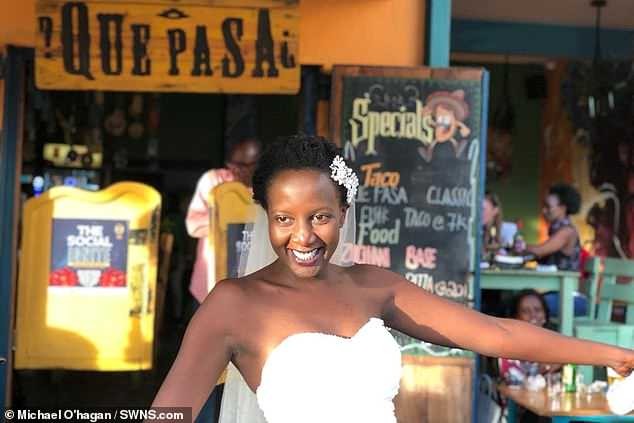 ‘Then I decided, you know what weddings seem so important here – I will marry myself.’

Lulu arranged the last-minute ceremony at Quepasa Bar in the Ugandan capital Kampala on August 27 – her 32nd birthday.

A friend who works as a web designer made and printed her invites, and her friend paid to hire her dress, while her brother baked her cake.

Lulu added: ‘[As soon as] I sent these out I immediately received phone calls asking who the groom was. I told people it was a surprise.

‘It’s shocking the price of wedding gowns in Uganda but when I told them I was marrying myself they offered to find me their cheapest dress.

‘I did feel a bit crazy trying on the dress and explaining that I was marrying myself. There was a kind of dismissive tolerance from the girls in the bridal shop.

‘I had to leave an ID card behind and when they saw my Oxford university card they screamed and were so impressed. I tried a few on and I almost cried.

‘It really is a special moment and I understood more than I had the excitement around weddings.’ 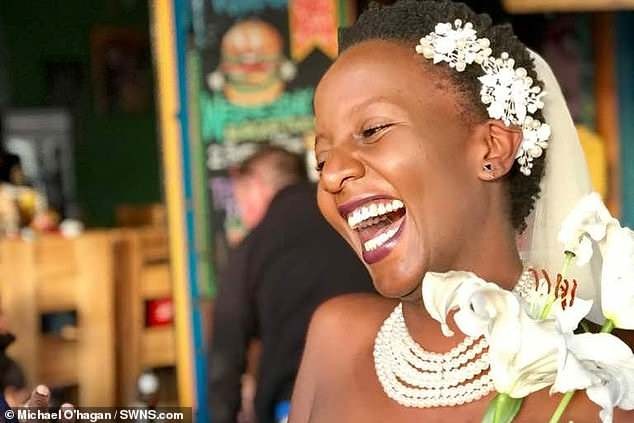 A friend did Lulu’s makeup at the venue, and the bar owner, also a friend  played the wedding march as she exited the toilets and walked into the venue.

‘I then spent a few minutes talking to friends and awkwardly explaining that there was no groom – most of them knew by this point,’ she said.

According to reports, another friend played the roll of the vicar as Lulu staged a mock exchanging of vows with herself in front of around 30 guests.

‘I was extremely happy,’ she said. ‘So many friends showed up, as well as international and local journalists, film directors and feminist entrepreneurs.

‘Marriage is an expression of love and commitment, however for many people back home, it is still considered the only way to guarantee a woman’s financial security.’ 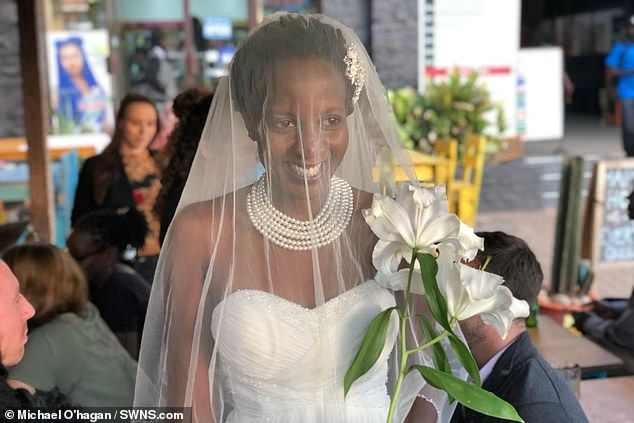 ‘I had worried about coming off as stupid but to have such a strong intellectual group of friends behind the idea, that was all the validation I needed for the choices I have made.’

Although, her parents didn’t attend the big day as they were ‘a bit confused’ about her decision to get married to herself.

‘When we talked the next day she was a bit confused and slightly hurt, but explained that by even wearing a wedding dress it proved I was ready for marriage,’ she said.

‘My father still maintains that he doesn’t know what to say.’