The New York Times on Wednesday reported that the U.S President, Donald Trump’s cellphone conversations are being intercepted by Russia and China to gather information on his associates and policy positions.

In his reaction, Trump described it as another ‘Fake News’ tweeting, ‘the New York Times has a new Fake Story that now the Russians and Chinese (glad they finally added China) are listening to all of my calls on cellphones. Except that I rarely use a cellphone and when I do it’s government authorized. I like Hard Lines. Just more made up Fake News!’. 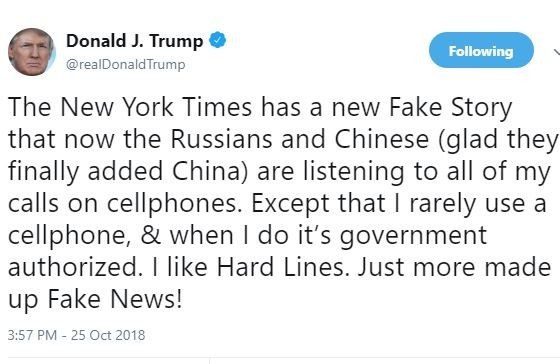 “When President Trump calls old friends on one of his iPhones to gossip, gripe or solicit their latest take on how he is doing, American intelligence reports indicate that Chinese spies are often listening — and putting to use invaluable insights into how to best work the president and affect administration policy, current and former American officials said.

Mr. Trump’s aides have repeatedly warned him that his cellphone calls are not secure, and they have told him that Russian spies are routinely eavesdropping on the calls, as well. But aides say the voluble president, who has been pressured into using his secure White House landline more often these days, has still refused to give up his iPhones. White House officials say they can only hope he refrains from discussing classified information when he is on them.”