Daily Post
Home US News Students demand professor’s resignation after his blog post that all men should...

An associate professor of business at Brooklyn College, Mitchell Langbert, is facing growing calls to resign after he issued a “satirical” essay in defending Supreme Court nominee Judge Brett M. Kavanaugh that argued “sexual assault” is a rite of passage for young males.

The Associate Prof said the blog was intended to start debate about free speech on college campuses.

Mitchell Langbert wrote a Sept. 27 blog post calling Democrats the “party of tutu-wearing pansies, totalitarian sissies” who use have used “anonymity and defamation” in trying to bring down a conservative judge, who strongly denies all allegations of sexual misconduct.

“If someone did not commit sexual assault in high school, then he is not a member of the male sex,” wrote Mitchell Langbert, an associate professor of business at Brooklyn College. He posted it on his personal blog just two hours after last Thursday’s hearing into allegations of sexual assault by Judge Brett Kavanaugh.

Mr Langbert continued: “In the future, having committed sexual assault in high school ought to be a prerequisite for all appointments, judicial and political. Those who did not play spin-the-bottle when they were 15 should not be in public life.”

Those comments have made Mr Langbert a new lightning rod in the debate that has consumed the nation in the wake of Mr Kavanaugh’s nomination. 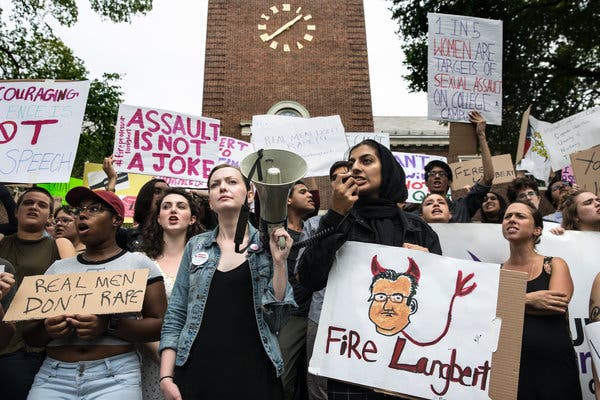 On Thursday, hundreds of students gathered outside of the campus’ grand clock tower to demand Mr Langbert be fired.

His blog, which has drawn more than one million page views, has reignited a debate over how universities balance professors’ freedom of speech and students’ concerns that some protected speech can make them feel unsafe on campus.

In a phone interview, Mr Langbert apologized for “saying things that upset people,” adding that the original intent of his post was to start a debate about free speech on college campuses.

But he also said he felt victimized by the reaction.

After his post began to spread on social media, Mr Langbert added a disclaimer on the post stating it was meant to be satirical.

“I was trying to be satirical, but I guess I’m no Jonathan Swift,” he said. “I appreciated that it may have been in bad taste and I have apologized for that and I will again. I’m sorry people got offended. I didn’t mean to hurt anyone’s feelings or cause them to not feel respected. I honestly didn’t expect them to read it.”

Holding signs reading “our tuition, our decision” and “I feel unsafe,” students chanted, “from Kavanaugh to Langbert, all these men have got to go!” One of the protest’s organisers, Corrine Green, encouraged students to file complaints against Mr Langbert with the college’s Title IX office, which could be the first step in a formal investigation.

“To have someone in a position of power espousing sexual assault is not a joke,” Ms. Greene told CNN. “It’s something that needs to be taken seriously.”

“[T]he First Amendment to the United States Constitution protects even speech that many experience as offensive, such as the faculty member’s post,” she told CNN.