An Indian woman who made an unsuccessful attempt last month to enter one of Hinduism’s holiest temples has been arrested and charges against her include “exposing her thigh” in a photograph she posted on Facebook while dressed as a pilgrim. 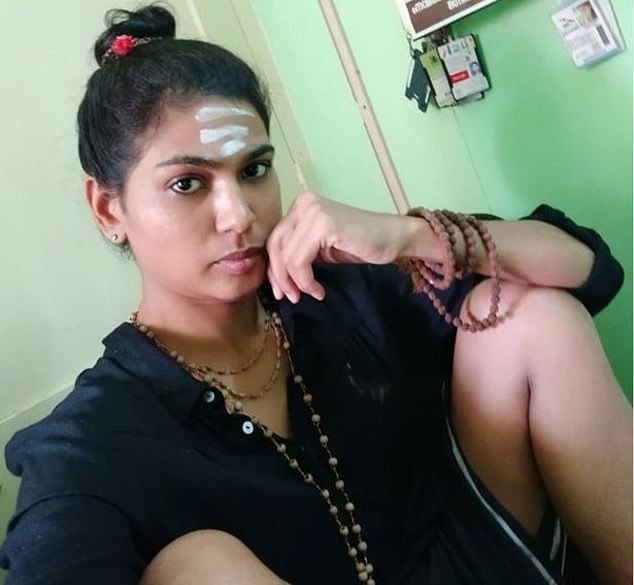 32-year old Rehana Fathima who is a telecom technician, activist and model, was stopped by protesters from entering the Sabarimala shrine which has historically been closed to all women of “menstruating age”.

Hinduism regards menstruating women as unclean and bars them from participating in religious rituals. The shrine management says the ban on women is also because the temple deity Lord Ayyappa was a bachelor.

In September, India’s Supreme Court overturned the ban, allowing women of all ages to visit the temple.

Rehana was accompanied by 100 police officers as she tried to make her way past Hindu devotees who defied the court’s ruling and intended to keep women out. She was eventually forced to abandon her attempt to enter the building’s sanctum. 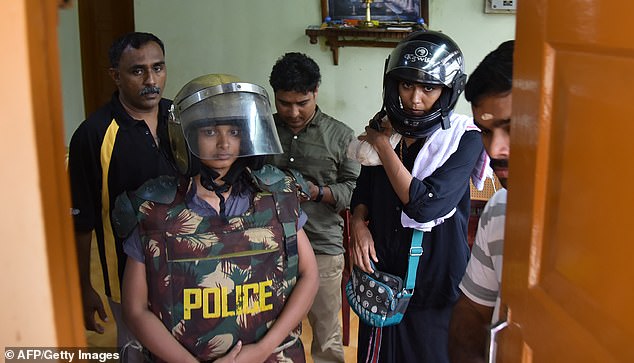 Miss Fathima was then arrested over a selfie she later shared in which she showed some of her thigh while dressed in pilgrim’s clothes, prompting complaints that the picture was ‘sexually explicit’ and wounded religious feelings.

The 32-year-old has been temporarily imprisoned while authorities investigate, BBC News reported.

In the picture Ms Fathima, a Muslim, is reportedly mimicking the temple’s presiding deity Lord Ayyappa in the way she poses.

Temple managers argue that the celibate nature of Lord Ayyappa is protected by India’s constitution.

Some religious figures consider menstruating women to be impure and police took up the matter after complaints that the picture ‘wounded the religious feelings of Lord Ayyappa’s devotees’. 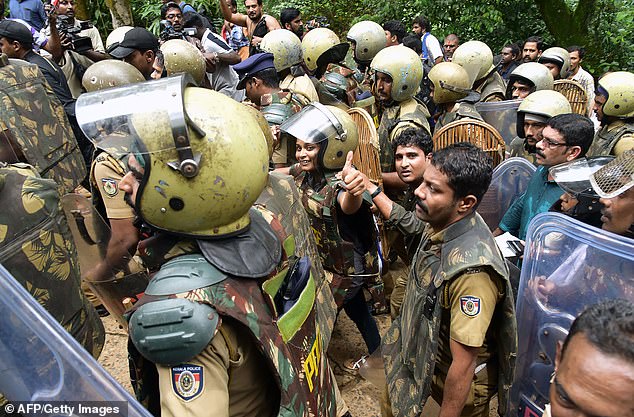 Ms Fathima tried to reach the temple with a female journalist, with both wearing protective gear and being escorted by police, but they were turned away by protesters.

She works as a technician for the state-run telecom company but has reportedly been suspended.

The entry of females between the ages of 10 and 50 to the centuries-old temple was banned informally for many years, and then by law in 1972.

But India’s Supreme Court lifted the ban in September, holding that equality is supreme irrespective of age and gender.

Despite the court ruling women were blocked from entering as hundreds of protesters fought street battles with police to keep them out.

About 1,000 police used batons to try to control the protesters, who attacked and damaged police and TV vehicles and forced female devotees to turn back.

Sabarimala is surrounded by mountains and dense forests in the Periyar Tiger Reserve and up to 50 million devotees visit the temple each year.

Several other temples across India have also banned women, saying the policy is intended to preserve the purity of their shrines.