Under a relentless cold rain, more than 30,000 Los Angeles public school teachers walked off the job Monday January 14, 2019. That means about 600,000 kids have no idea when they’ll see their teachers again. 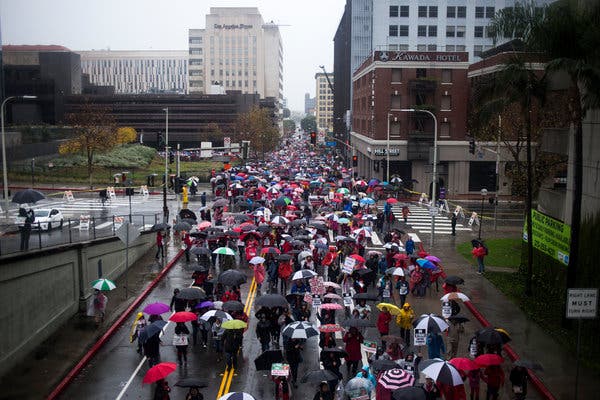 It turned out to be the largest school strike in the country and the first in three decades in the district. Holding plastic-covered signs on rain-drenched picket lines across the city, they demanded higher pay, smaller classes and more support staff in schools.

The strike effectively shut down learning for roughly 600,000 students at 900 schools in the district, the second-largest public school system in the nation. The schools remained open, staffed by substitutes hired by the city, but many parents chose to keep their children at home, either out of support for the strike or because they did not want them inside schools with a skeletal staff.

With negotiations apparently at a standstill, the strike could last days or even weeks. 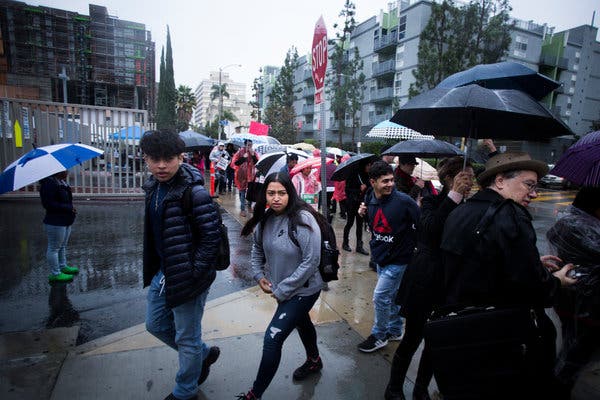 The decision to walk off the job came after months of negotiations between the teachers’ union, United Teachers Los Angeles, and the Los Angeles Unified School District. Although educators on all sides agree California should spend more money on education, the union and the district are locked in a bitter feud about how Los Angeles should use the money it already gets.

Although district officials have agreed to come closer to meeting some of the union’s demands, they say fulfilling all of them would bankrupt the system, which is already strained by rising health care and pension costs.

First day of our historic strike! On the line for our students. So much at stake. #UTLAStrong #WeAreLA #Strike4Ed pic.twitter.com/KkQ18zo0Pa

But this strike isn’t focused on teachers’ salaries.

“We want to have fully staffed schools. That means librarians, nurses, psychiatric social workers and their interns. We have 46, 45, 50 students in a class. It’s unacceptable.”

Both the union and the school district say they want smaller class sizes, bigger teacher salaries, and more counselors and nurses in the district’s roughly 1,000 schools.

The big debate revolves around how to fund them.

While the adults keep struggling to find a resolution, students are still expected to go to school during the strike.

When you cut our schools to the bone, you set us up for failure. When you reinvest in our schools, we thrive. That’s why @UTLANow is on the picket line. #Strike4Ed #UTLAStrong #WeAreLA pic.twitter.com/l4IjWE9KAP

Despite the mass exodus of 32,000 teachers and staff, classes will continue at all schools. LAUSD has hired about 400 substitute teachers and reassigned more than 2,000 administrators to help educate the 600,000 students.

As for how that works out logistically, “It’s case by case, school by school,” said Shannon Haber, chief communications officer for LAUSD.

The huge shortage of teachers is enough to make Andrew Krowne keep his four LAUSD children home for as long as the strike lasts.

“It’s just a sheer overwhelming number of children versus adults,” he said. “I’m not risking my children’s safety.”

The union wants LAUSD to pull from its $1.86 billion in reserves to increase school staffing and boost teachers’ salaries by 6.5%.

But the school district says it’s not nearly as wealthy as the teachers’ union suggests.

The school district said at this rate, it might not even have enough money to meet a required 1% reserve by the 2021-2022 school year.

“Our commitment to our families is to make sure all of the money we have is being spent in schools. We are doing that,” LAUSD Superintendent Austin Beutner said in a statement.