In a controversial decision, a university in Egypt reportedly expelled a female student after a video showing her hugging a man went viral on social media. The Al-Azhar University justified their decision to expel the student by claiming that her actions had “undermined the school’s reputation.” 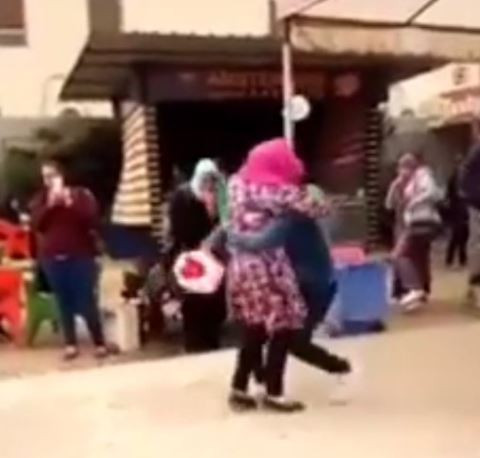 In the viral video shown below, a young man can be seen going down on his knees with a bouquet of flowers before a woman. He then proceeds to hug the girl in elation in what appears to be a marriage proposal.

The video was not filmed at Al-Azhar, but at another establishment, Mansoura University in the country’s north. Nevertheless the disciplinary council of the Al-Azhar University campus in Mansoura on Saturday “decided to expel the young girl definitively”, university spokesman Ahmed Zarie told AFP.

He said the video had caused a “public outcry” and that the university’s decision to expel her was because she had presented a “bad image” of Al-Azhar University, which strictly segregates the genders. He said hugging between unmarried men and women violates “the values and principles of society”.

The expelled student, however, can appeal the expulsion decision, Zarie said. The young man who appeared in the video could also face sanctions, a spokesman for Mansoura University said, adding that the school’s disciplinary council will meet on Monday to decide his “punishment”.

Egypt, a predominantly Muslim country, is a largely conservative society.

In December 2018, an Egyptian actress, Rania Youssef was charged with inciting “immorality and promoting vice”, after a group of lawyers made a complaint to the country’s chief prosecutor because the actress was said to be wearing a revealing dress to a film festival in Cairo. Read the story through this link

Still in 2018, prosecutors detained a female singer for four days for “incitement to debauchery” after an online video clip which included sensual oriental dances and suggestive gestures went viral. And in 2017 another female pop singer was sentenced to two years in prison on similar charges, also over a video deemed provocative. Her sentence was reduced to a year on appeal.

Egypt's al-Azhar University just permanently expelled a student for giving her boyfriend a "hug" after he proposed to her. Yes, we are talking about the same country that has one of the worst records of sexual harassment. Deep societal hypocrisy + government's pathetic policies pic.twitter.com/jYZX6i58vF