The United States is offering a reward of up to $1m (£750,000) for information about one of the sons of the late al-Qaeda leader Osama Bin Laden. 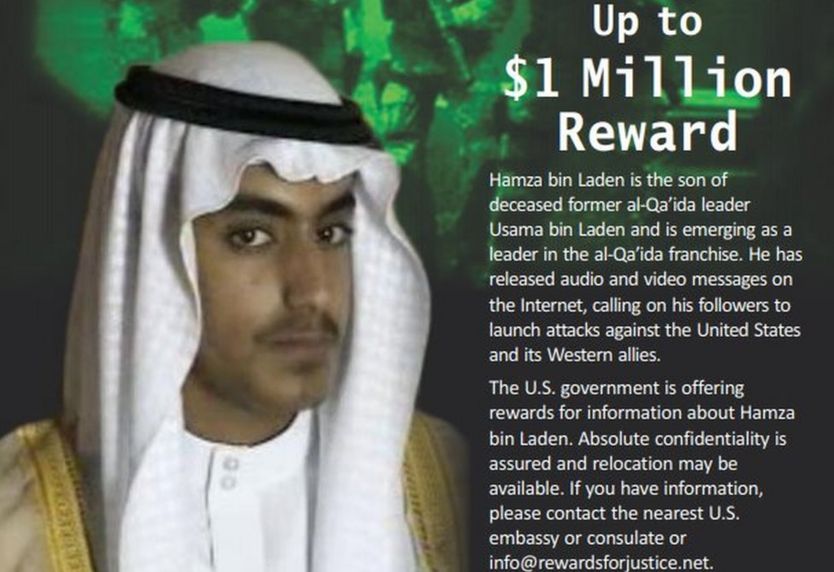 Hamza Bin Laden is emerging as a leader of the Islamist militant group, officials say.

He is thought to be based near the Afghan-Pakistani border.

According to the US State Department, Hamza bin Laden, whose father was killed by US Navy Seals in Pakistan in 2011, is emerging as a leader in the al Qaeda terror network.

As American officials hunt him down, United Nations member states are required to freeze Hamza bin Laden’s assets, and comply with a travel ban and arms embargo, according to the State Department bureau of counterterrorism. US officials estimate Hamza bin Laden is between ages 30 and 33.

WANTED. Up to $1 million for information on Hamza bin Laden, an emerging al-Qa'ida leader. Hamza is son of Usama bin Laden and has threatened attacks against the United States and allies. Relocation possible. Submit a tip, get paid. https://t.co/LtBVhsrwTc #RFJ pic.twitter.com/gmx5hkoSzQ