Philippine President, Rodrigo Duterte has publicly boasted about the size of his penis and sexual prowess.

Rodrigo Duterte,74, made the bizarre during campaign rally at the Puerto Princesa City Coliseum in Palawan.

The politician started off his speech by boasting how he has a very impressive member which “points all the way up”, Sun UK reports.

Duterte said that a man is measured by his character, then he added that a man’s good looks count for nothing if he has a small penis.

For this reason, he would have been unhappy if God gave him a tiny penis, he said.

“If God gave me a small penis, I would have cut it in front of the altar,” he said, drawing laughs from the crowd.

The president then shared story about the time he lived at the YMCA in Manila as a student. He said he would walk around butt naked and that he drew admiration from other residents staring at his penis size.

He added: “When I was young, (my penis) almost looked up to the sky.” 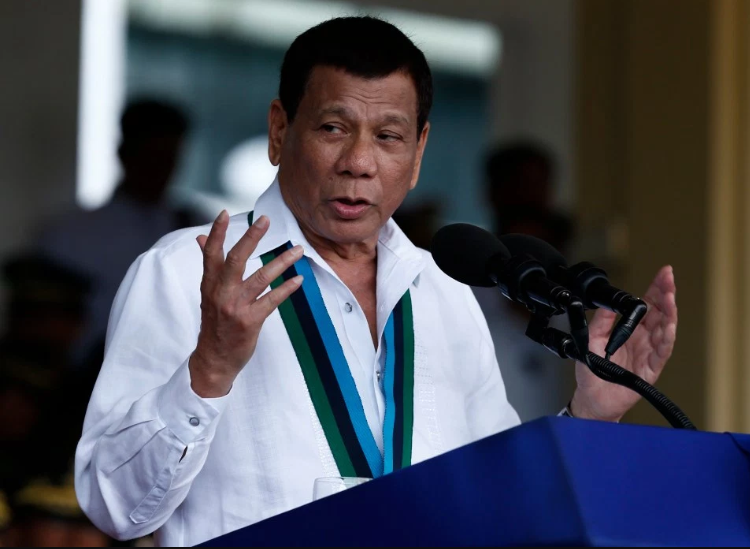 Duterte then moved his microphone up and pointed it all the way to the ceiling at the Puerto Princesa City Coliseum in Palawan and said that his penis was so upright that the top would almost reach his belly button.

“I’m very thankful to my father. At least he let me out into the world highly-equipped”, he said

Duterte also recalled visiting a place which he simply described as full of women.

According to Dailymail, this is not the first time the president has used sexual anecdotes in public.

In December 2018, Duterte said when he was younger, he touched the family’s domestic helper while she was asleep.

The story caused outrage until his spokesperson Salvador Panelo claimed it was untrue.

In August 2018, the president provoked worldwide outrage when he said: ‘As long as there are many beautiful women, there will be more rape cases.’