A beautiful woman decided to upgrade her looks by getting lip fillers on her already beautiful lips. But the outcome of the procedure was so bad and scary that her friends can’t even look at her face twice.

29-year-old Christina Burton was left with horrific “sausage lips” after the procedure and had to be rushed to hospital. Unfortunately, her lips continued to swell and she remained in pains and unable to breathe properly.

Christina , a mother of two used numbing cream before the £75 procedure was administered at her home in Wythenshawe, Greater Manchester United Kingdom. After the procedure, the beautician reportedly assured her that swelling was normal. However, hours after having the 1ml of filler, the pain became unbearable that she had to be rushed to hospital to receive adrenaline, oxygen and steroids. Christina said she feared she could have died during the botched procedure which she said left her looking like a “duck gone wrong”. 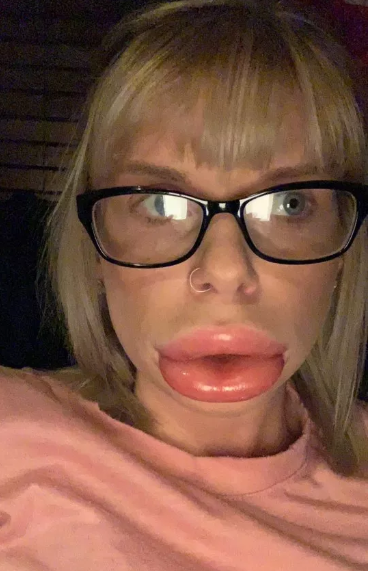 My lips kept getting bigger and bigger and more painful. I thought my lips were going to explode, the pain was unreal.

I couldn’t swallow anything. I tried taking antihistamines and painkillers to help with the swelling and I had an ice lolly to keep them cool but they just got out of control.

As soon as they put the cream on I just knew something wasn’t right, my lips were tingling and felt like they were swelling up straight away.

When you have numbing cream on it does feel like it’s swollen because it’s numb.

That time I just felt something wasn’t right – my lips were swelling straight away and I was in pain, which I never usually am.

After she left I looked in the mirror and saw they were swollen, my throat was numb and I started struggling to swallow.

The swelling was that bad it went up into my nose and it closed my throat and nose. I was struggling to breathe.

When it got to that point I had to phone an ambulance”.

An ambulance crew raced to her home and they gave her adrenaline and put her on oxygen and rushed her to Wythenshawe Hospital, where staff gave her steroids and drugs and kept her in overnight for monitoring.

The mother of two added: “The hospital nurses couldn’t believe how badly swollen my lips and the skin between my nose and lips were.

“The pain felt like they were going to explode, it felt like when something has its own pulse.

“I couldn’t open my mouth because my lips were that heavy, it was scary.”

Christina said her friends were in shock when she sent them photos of her new lips and one friend even threw up in shock.

She had the botched lip filler procedure done in September and her lips are now back to normal. But she has urged people to do their research before they undergo cosmetic procedures.