Daily Post
Home Around the world VIDEO: Crocodile surfaces with the body of a man declared missing prior...

This is a terrifying incident! 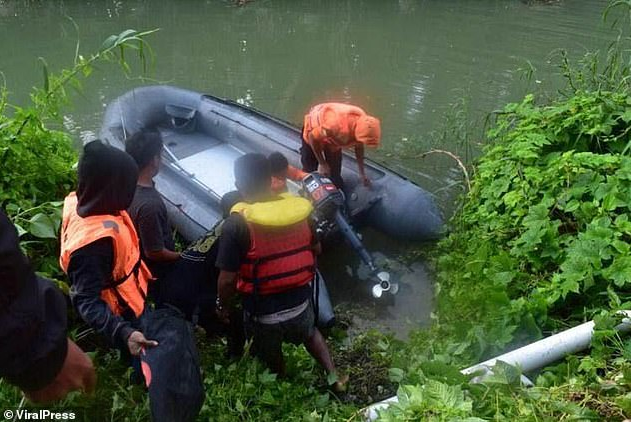 Darlin’s sister, who was on the river bank, tried to help by pulling the hose he was using to breathe underwater, but the crocodile plunged its teeth into Darlins crotch, thrashed around with him in the water, then disappeared into the depths of the water.

His sister alerted Indonesian authorities immediately and they began searching for the missing man from the Kinapani Village alongside the Malaoge river.

The Search and Rescue Team spotted Darlin’s body when the crocodile emerged from the water with its jaws still clamped around Darlin’s body. His lower legs and feet can be seen in the video sticking out of the water as the huge crocodile floats past before submerging again.

Rescuers boarded boats and eventually retrieved Darlin’s body intact and was returned to his family for a funeral.

Darlin’s death came just two day afters another man, Subli, 35, was killed by a crocodile while he was washing his hands in a canal in the Indragiri Hilir regency.