The former head of a notorious Ethiopian prison, Hassan Ismail Ibrahim, was captured over the weekend in the central Somalia town of Goldogob following a tip off, and handed to Ethiopian authorities in Jigjiga, according to reports.

Hassan Ismail Ibrahim, also known as Hassan Dhere, is expected to face trial based on accusations of routine torture of the inmates at notorious “Jail Ogaden” in Ethiopia’s Somali region.

Some former prisoners who were interviewed by Human Rights Watch said they saw people being tortured in their cells and that many of the prisoners died.

Many of the inmates at “Jail Ogaden” were allegedly linked to the Somali’s separatist group, the Ogaden National Liberation Front – a rebel group fighting for the right to self-determination for Somalis in the Somali Region of Ethiopia 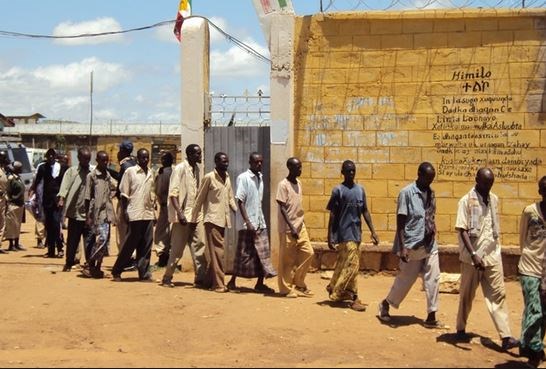 Following the appointment of a new prime minister, Abiy Ahmed in April last year, Ogaden National Liberation Front signed a peace deal with the government in October 2018. The prison was closed and government announced plans to transform it to a museum.

In an interview with Al Jazeera news last month, the new president of Ethiopia’s Somali region, Mustafa Omer, vowed to arrest the people who allowed the torture at the jail Ogaden to face justice.

The former president of the Ethiopia’s Somali region, Abdi Mohamoud Illey, is currently in federal custody facing criminal charges after he was deposed.

The head of the jail, Hassan Ismail Ibrahim, went into hiding in a neighboring town until he was arrested in May following a tip off.

Jijiga Central Prison, commonly known as Jail Ogaden or Jail Ogadeni [Jeel Ogaden in Somali] is in Jijiga, the capital of Somali Region.