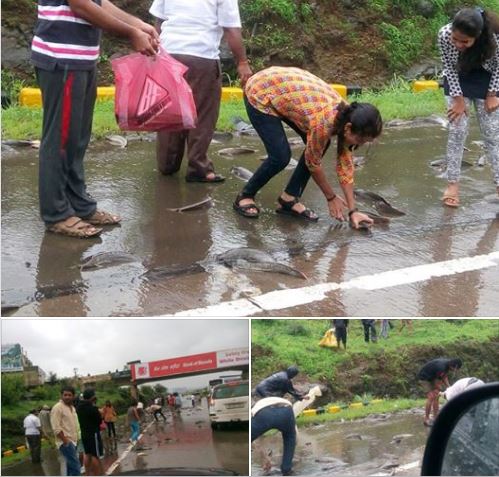 The video below surfaced online few days ago claiming that fish rained fish in Mumbai, India. The video has since gone viral. Did it actually rain fish? We went to the people to find out.

According to Indiatoday, Mumbai witnessed heavy rain before the video emerged, but it didn’t rain fish and has never rained fish. The video was doctored.

But, the video is really funny and entertaining.  Watch the video below

Now, here is what happened according to Indiatoday.

“According to BBC news”, fish was raining in Mumbai instead of “water or snow”.

“Scientists are still confused by this mysterious event.”

In July 2016, there were similar reports and pictures of fish “falling from the sky” on Mumbai Pune Expressway, India.

The footage shows people picking fish on the road. So, the video below seem to have been taken from the 2016 footage.

In October 2016, there was also a similar incident where residents of Khansoorajpur village in Jaipur woke up to find fish falling from the sky along with heavy rain.

Prior to that, in June 2015, The Telegraph reported that villagers from Gollamudi and Pallagiri in Andhra Pradesh had witnessed a ‘fish rain’.

“I thought it was a joke but when I went out I too found fish in my backyard and also on the road,” The Telegraph report quoted a resident.

That’s not all. In July 2010, TOI reported that locals in Varanasi’s Sarnath had seen “live fish on the middle of road after a strong monsoon shower”.

So, does it rain fish in India sometimes?

No, because the fish do not exactly fall from the sky. Instead, they are basically blown into land from nearby water bodies by strong winds.

Scientists believe that this rare phenomenon occurs due to whirlwinds and tornadoes. When a whirlwind or tornado form a waterspout (a rotating column of water and spray) over a water body, it often sucks out fish and other creatures into the vortex.

When these travelling wind patterns lose their speed, they begin dropping the creatures, sometimes on land, giving the appearance of fish (or frogs) falling out of the sky.