A Nigerian lady planning to marry her fiancé in three months’ time is currently struggling to recover from a battered eye after the man she is engaged to marry in August 2019 thoroughly beat her up. The incident happened on Thursday at Iwere-Ile, Iwajowa, Oyo State. 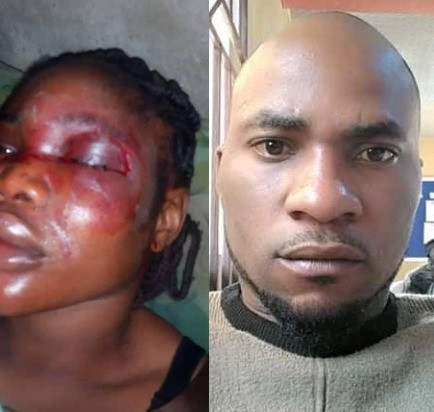 “FEW MONTHS TO WEDDING.
Engaged to be married by August 2019. She was not involved in an accident. Her fiancee did this to her. This is not the first time. she’s been covering him up in the name of “where would I start from? I still love him”.

Lawrence is on the run but can’t run forever.. DV Advocate, please that’s his facebook page..” 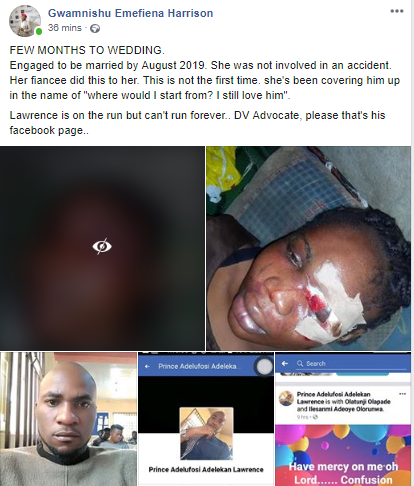 Omolara Busari, who has now canceled the wedding, told Punchng two days after the post went viral online that calling off the wedding will save her from a lifetime of misery or, in worse case scenario, death. 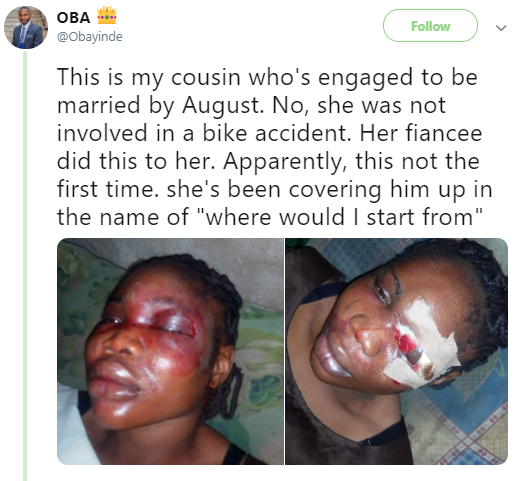 Omolara, 29, from Iseyin Oyo State Nigeria, told The PUNCH that she has endured in her relationship with 32-year-old , Adelekan Adelufosi for four years.

According to Punch, the couple had planned to finally get married in August 2019 after four years of dating, but their wedding has now been called off due to fiance’s violent attitude.

Omolara told The PUNCH on phone that she had only challenged Adelufosi for asking her not to ever relate with a woman who lives in their area.

By the time she knew what was happening, she had been admitted to hospital.

She said, “There is a woman who lives in my area, close to my apartment. We were just discussing and greeting each other when he (Adelufosi) showed up.

“Later, he went to the woman’s shop and warned her not to ever see her around me again. When we entered my apartment that night, I asked him, ‘Why did you do that?’

“That was the last thing I remembered saying. By the time I opened my eyes, I found myself in a hospital.”

From last Thursday night, Omolara had been receiving treatment and was discharged on Monday.

But that was not the first time Omolara would get physically assaulted by a man who claimed to love her and make his wife someday.

“That was the fifth time he would beat me,” Omolara said.

When she was asked why she held on to the man for so long despite his abusive behavior, Omolara said it was because she had a daughter for him.

She said, “Actually, I wanted to marry him because I have a daughter, who is two years old, for him. This is what kept me glued to the relationship. But this time around, I don’t care. Our relationship has ended and I have canceled our wedding.

“Right from the beginning, my parents and siblings didn’t approve of our relationship, but I thought maybe after our wedding, he would change.

“We were already planning our wedding for August 2019, but like I said, it cannot hold again.”

Omolara lamented she did not heed her parents’ and siblings’ warning before. However, she was thankful it was not too late for her.

“Now, they (my parents and siblings) are relieved and I have finally learnt my lesson. I am so happy that our relationship has ended,” she said.

Omolara said she was more relieved because she would not have to spend her savings on Adelufosi again, who she claimed to have been responsible for since their relationship started.

She said, “He only has the primary school leaving certificate. I am a trader and deal in beverages. He doesn’t have a job and I have been the one taking care of him.

“I used to buy him clothes, shoes and others. Even the phone he’s using right now, I bought it for him. I was practically taking responsibility for his life.

“Just last week, I gave him N50,000 capital, encouraging him to start selling recharge cards. But after the beating, he burgled my shop and ran away. Up till now, he’s still at large. He was always mad at me for telling him to look for a job.”

When she was asked about what she saw in the man that made her enter into the relationship with him in the beginning, Omolara said she thought he was a good man because he was “calm and gentle.”

“I never knew he could be this dangerous. I knew his real person when I got closer to him. I also did not know he smokes and drinks alcohol a lot. Anytime I told him what he was doing was not good, he would be angry,” she added.

Asked what she would do if the suspect came back to apologize to her, she replied, “Am I a fool? It can’t happen. I have made up my mind. It was then that I used to fall for his apologies. He can never change.

“He used to threaten me that if I decided to break up with him, he would take our child, and this was why I held on to him for so long. I will raise my daughter, whom I had by Caesarean Section, on my own; I would never let her near him.”

Omolara, who is happy she ended the relationship said the only thing she now wants is justice.

“I want him to be punished,” she said.

She also told our correspondent that immediately after her

She said she reported the case to the Divisional Crime Branch, Iwere-Ile Police Station, Oyo State immediately she was discharged from the hospital on Monday morning, May 13th.