Chris Pratt and Katherine Schwarzenegger tied the knot in a lavish ceremony on Saturday June 8.

The wedding, which started 5.30pm, was attended by her friends, family, and many celebrities including Rob Lowe and “Guardians of the Galaxy” director James Gunn.

The couple tied the knot at the exclusive San Ysidro Ranch in Montecito California, with Katherine, arriving at the wedding marquee on the arm of her father, the former governor of California Arnold Schwarzenegger.

Chris Pratt’s 6-year-old son, Jack, and Katherine Schwarzenegger’s mother Maria Shriver were also at San Ysidro Ranch to witness to beautiful demonstration of love between Chris and Katherine. Katherine’s brother Patrick Schwarzenegger, 25, and her uncle Bobby Shriver, were among many others who attended the wedding.

Katherine, 29, wore a strapless white wedding gown and kept the rest of her bridal look simple with an elegant veil and her long brunette dresses draping down.

All her bridesmaids were dressed in floor-length blush pink gowns with plunging necklines.

Pratt, 39, who was born in Virginia, Minnesota , and later moved to California. He rose to fame in NBC’s series “Parks and Recreation” before movie stardom came calling, thanks to his roles as Owen in the Jurassic Park movie series from  2015 movie to Jurassic World “Fallen Kingdom” (2018). 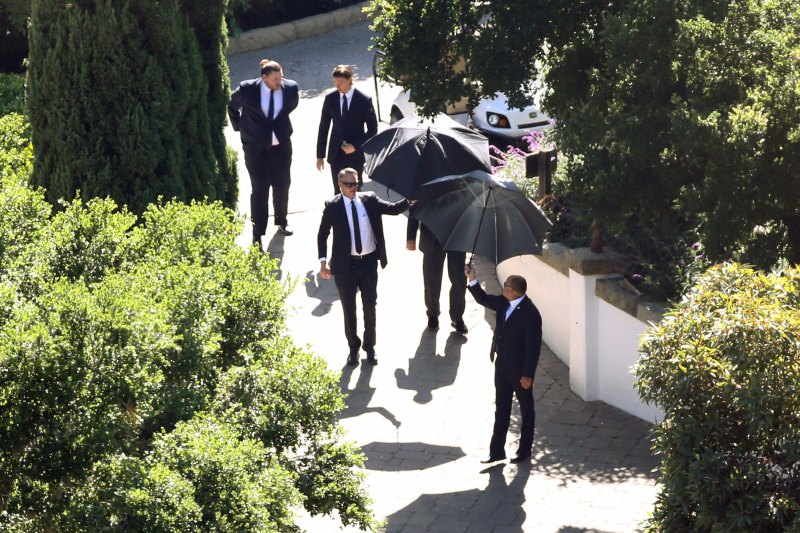 Schwarzenegger, 29, is an author and lifestyle blogger. She is the eldest child of the “Terminator” actor, Arnold Schwarzenegger and broadcast journalist Maria Shriver. Katherine was born and raised in Los Angeles, California

Pratt popped the question in January 2019, months after the couple had people guessing if they were an item when they were spotted together in June 2018.  Thereafter they were spotted on a church date in August and visited a winery with Pratt’s brother the following month, September.

Six months after the big question, ‘WILL YOU MARRY ME? ‘, they said ‘I DO, I DO’ at San Ysidro Ranch, California, June 8. Congrats to the love birds!!