A Virginia high school drama teacher who was first arrested in April for secretly recording videos of his au pair in his Reston home, has been hit with 20 new charges of  child pornography and a felony charge of illegal filming.

36-year-old Raphael Schklowsky, a teacher and theater director at Herndon High School, was first arrested on April 8 for secretly recording his au pair in his Reston home by hiding a camera in an air conditioning vent.

Fairfax County Police had said at that time that they had no evidence that the teacher targeted his students, but upon further investigation, police said they found a trove of 3,500 videos stored on 32 different devices, secretly recording his students changing their clothes. The incident reportedly happened between May 2017 and June 2018

On Wednesday, police held a press conference saying they’ve identified roughly 10 individuals who were illegally recorded at the school. They said that dozens more may have been victimized.

‘This is a huge, disappointing development, one that none of [us] wanted to be part of the outcome,’ he said at the Wednesday press conference. 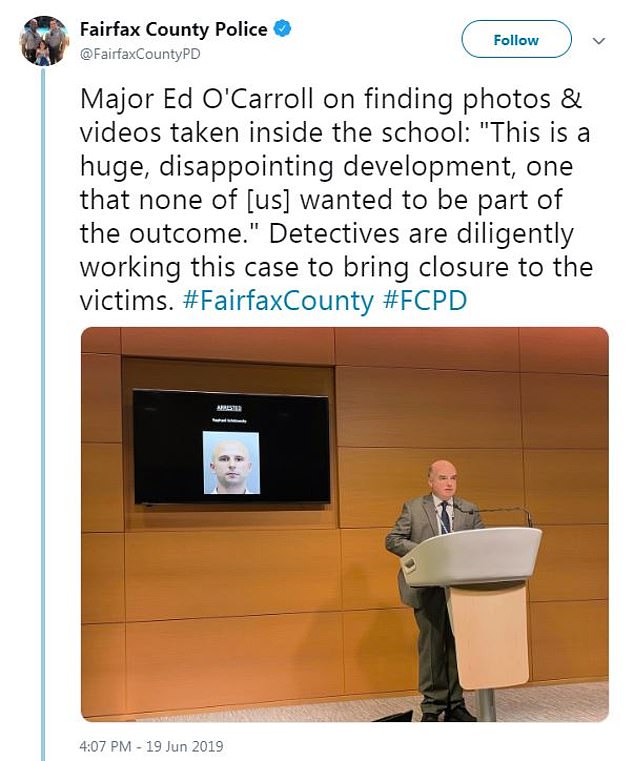 Nine of those people have been contacted by police.

Now police are urging other students who think they may have been secretly recorded to come forward.

‘Maybe you weren’t sure of what you saw…but maybe now it makes sense to you,’ Major Ed O’Carroll, commander of the Major Crimes Bureau,said. ‘There’s so much digital evidence that detectives have to work through.’

Some of that footage was taken from outside the area and has been sent to police in the New York area.

Raphael Schklowsky is currently in custody at the Fairfax County Adult Detention Center and is held without bond while investigation continue.

Schklowsky’s secret activities were first uncovered after his au pair said she found a hidden camera in an air conditioning vent in his home where she was working.

He was charged with four misdemeanor counts of unlawful filming and released on bond for that incident.