More than 50 people were killed on Wednesday when an airstrike hit a migrant detention center near Tripoli, the capital of Libya. More than 200 others were injured, a government official said. 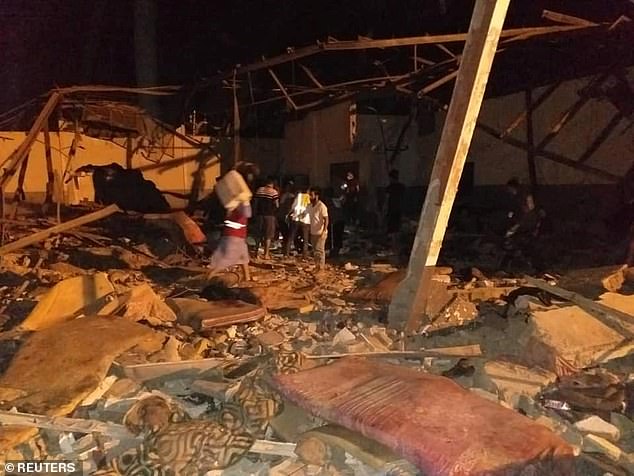 “I expect the death toll to go up given that there are critically injured people being treated in hospital,” Malek Merset, a spokesman for Libya’s Ministry of Health, said.

Horrific images of the detention center in Tajoura, show extensive damage to several buildings at the location. Photos show piles of rubble where structures had been, while emergency crews worked to remove both the dead and the wounded.

Libya’s Government of National Accord (GNA) condemned the “horrific crime,” blaming Gen. Khalifa Haftar, the leader of Libyan National Army (LNA) – a rebel group who have been waging military campaign for the past two months to overthrow Libya’s internationally recognized government.

But the LNA denied responsibility for the attack. They point fingers at Tripoli-based “militias” — who are mostly loyal to GNA, of orchestrating a “conspiracy” to “tarnish” their reputation.

“The militias have, in the past, targeted civilians in Tripoli and blamed the LNA, but they failed … what they have done today is nothing but propaganda,” LNA spokesman Ahmed al-Mismari said Wednesday during a press conference, calling for an independent investigation into the attack.

No group has claimed responsibility for the attack yet, which the GNA said constitute a “war crime.”

“We ask the international community through the African Union, European Union and (other) organizations to take a firm and clear stance against these continued violations,” the GNA statement read.

The United Nations Security Council is reportedly holding closed-door consultations on the attack.

Libya has been mired in violence and confusion since the killing of dictator Muammar Gaddafi in 2011. Ghaddafi ruled Libya for 42 years (1969 – 2011). Two rival authorities and a multitude of militias have been vying for control of the oil-rich country since his death.

Last week, the Libyan government (GNA) fighters said they seized sophisticated U.S. and Chinese rockets as well as drones when they captured a rebel base in the mountains south of Tripoli. Read our earlier report through this link.