In what looked like manna from heaven to many, an armored truck’s side door suddenly opened Tuesday night while on Atlanta freeway, spilling thousands of dollars on the road — and making it the ‘best day ever’ for passing drivers. The total amount spilled on the road was estimated $175,000, police said.

The truck, loaded with cash, was said to be traveling westbound on Atlanta’s I-285 when its side flew open.

Footage shared online show drivers who stopped and got out of their vehicles to grab the cash.

Bad news for the drivers who thought it was manna from heaven!  The police have issued a statement asking them to return the money or face prosecution — a felony or misdemeanor charge, depending on the amount they scooped up.

“While we certainly understand the temptation, it’s still theft and the money should be returned,” wrote police officials. “We are thankful there were no crashes or pedestrians struck as a result of this isolated cash storm.”

“911 callers said that 15+ vehicles had stopped and people were frantically taking the money,” police explained in a statement Wednesday.

“Officers and the truck crew gathered a few hundred dollars that was still there when officers arrived, but plenty was taken by passerby’s sticky fingers. The exact amount is currently unknown.” 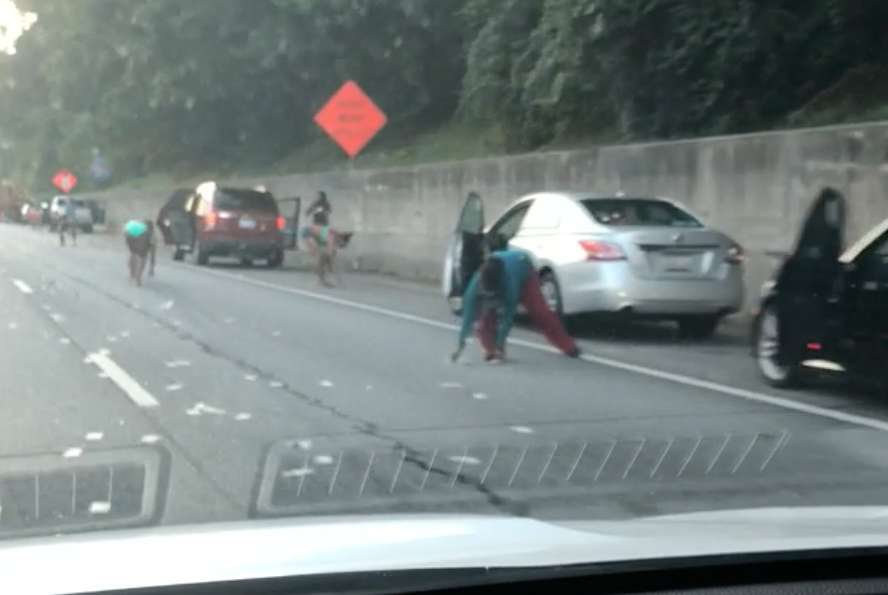 After police issued a statement, some drivers who apparently felt bad reportedly returned the money on Wednesday

“So, believe it or not, some people have been returning the money,” police said in another statement. “We understand it was a bizarre occurrence, but do the right thing and return the money.”