The woman identified as Blessing Stephen was a member of a child trafficking syndicate recently smashed by operatives of the Nigerian Inspector-General of Police Intelligence Response Team, according to the report.

The operatives had launched a manhunt for one of the suspects, John, who abandoned a four-year-old boy in a church in the Ketu area of the state.

City Round learnt that Ntoro’s neighbors were alarmed by the boy’s frequent cries and became suspicious, which forced the woman to return the child to John, asking her to get a baby as replacement.

According to the outlet, John brought Ojo back to Lagos and abandoned him inside the church located along the road on the pretext that she wanted to pick some loads on the other side of the road.

The church reported the incident at the Ketu Police Station and the boy was later reunited with his parents.

Consequently, a petition was addressed to the IRT to fish out the suspect.

The team tracked down John a few weeks ago in Ibadan, Oyo State Nigeria, and she led them to arrest her accomplices, Stephen and Ntoro.

She told the police that it was hardship that made her to engage in child trafficking, adding that she needed money to treat an ailment she was battling with.

John said, “I did an abortion which backfired. I had a surgery and needed money to continue treatment. I contacted my friend, Blessing Stephen, and she told me I could raise money by stealing a child. I abducted the boy and took him to Ibadan, Oyo State, where Blessing lived with her husband (Israel Ariyo).

“The boy spent three days with them before we took him to Akwa Ibom where we sold him to Mrs Ntoro for N350,000.”

Stephen, a native of Nsitayi, Akwa Ibom State Nigeria, said apart from Ojo, she had sold three children of hers to Ntoro, who in turn resold them. 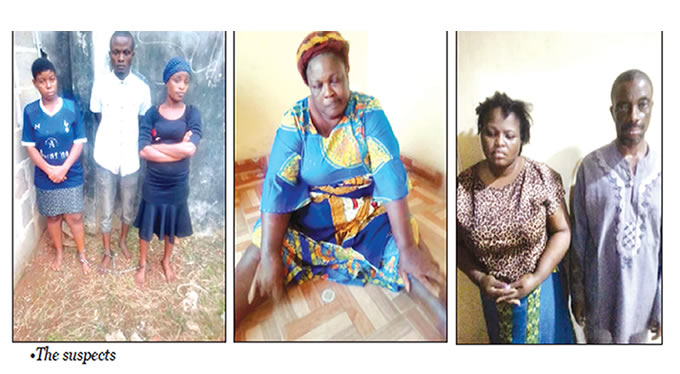 She said, “I once lived in Ikota, Ajah. I dated one Julius Abang and he impregnated me. I had a boy named Emmanuel for him in 2010 and the following year, we broke up. My mother was taking care of me and the boy but when life became unbearable, I sought advice from Mrs Ntoro, who is from my village.

Later Mrs Ntoro called from the village that she needed another baby boy. I told Blessing (John) but unfortunately we ran into trouble.”

It was gathered that Ntoro, while being interrogated by the police, disclosed that she worked with Anthony and Godwin.

Anthony said Godwin, who was the husband of her late friend, contracted her to look for buyers for children, adding that he received about N300,000 (833) proceeds from two babies they sold.

Nigeria is home to the highest number of very poor people in the world – UK Prime Minister, Theresa May says

Godwin said he helped women to sell their babies because they were desperately in need of money.

The police said Ntoro and Godwin were being investigated to track those they the children to.