Elijah E. Cummings,  the U.S. House of Representatives for Maryland’s 7th congressional district, and a sharecropper’s son who rose to become a civil rights champion and the chairman of one of the U.S. House committees leading an impeachment inquiry of President Donald Trump, has died. He died Thursday of complications from longstanding health issues, AP reported.

Cummings was a formidable orator who advocated for the poor in his black-majority district , which encompasses a large portion of Baltimore and more well-to-do suburbs.

As chairman of the House Oversight and Reform Committee, Cummings led investigations of the president’s government dealings, including probes in 2019 relating to Trump’s family members serving in the White House.

According to AP, Trump criticized the Democrat’s district as a “rodent-infested mess” where “no human being would want to live.” The comments came weeks after Trump drew bipartisan condemnation following his calls for Democratic congresswomen of color to go back to their “broken and crime-infested countries.”

Cummings replied that government officials must stop making “hateful, incendiary comments” that distract the nation from its real problems, including mass shootings and white supremacy.

“Those in the highest levels of the government must stop invoking fear, using racist language and encouraging reprehensible behavior,” Cummings said.

On Thursday, Trump ordered flags at the White House, military bases and other federal buildings to be flown at half-staff through Friday to honor Cummings. He also tweeted his “condolences to the family and many friends of Congressman Elijah Cummings. I got to see firsthand the strength, passion and wisdom of this highly respected political leader.” The tweet made no reference to past feuds.

Former President Barack Obama, whose 2008 presidential bid counted Cummings as an early supporter, said he and his wife, Michelle, were “heartbroken” by the loss of their friend.

“As Chairman of the House Oversight Committee, he showed us all not only the importance of checks and balances within our democracy, but also the necessity of good people stewarding it,” Obama said in a statement, describing Cummings as “steely yet compassionate, principled yet open to new perspectives.”

In a joint statement, former President Bill Clinton and his wife, former Secretary of State Hillary Clinton, also praised Cummings’ leadership of the committee “in finding facts, exposing fictions, and demanding that our government be accountable.”

Congressman and civil rights leader John Lewis said that with Cummings’ death, Americans “have lost a great leader at a time of crisis in our democracy.”

“When this nation needed him most, he became a moral voice ‘crying in the wilderness,’ and his words and actions called a reluctant nation to conscience,” the Georgia Democrat said in a statement.

Cummings’ career spanned decades in Maryland politics. He rose through the ranks of the Maryland House of Delegates before winning his congressional seat in a 1996 special election to replace Kweisi Mfume, who left to lead the NAACP. 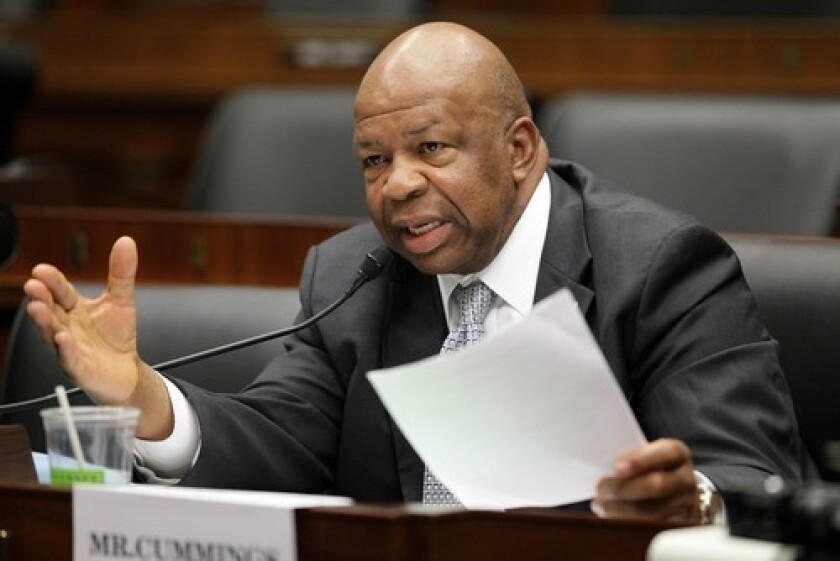 By 2016, Cummings was the senior Democrat on the House Benghazi Committee, which he said was “nothing more than a taxpayer-funded effort to bring harm to Hillary Clinton’s campaign.”

Throughout his career, Cummings used his fiery voice to highlight the struggles and needs of inner-city residents. He believed in much-debated approaches to help the poor and addicted, such as needle exchange programs to reduce the spread of AIDS.

His widow, Maya Rockeymoore Cummings, chairwoman of Maryland’s Democratic Party, said in a statement: “He worked until his last breath because he believed our democracy was the highest and best expression of our collective humanity and that our nation’s diversity was our promise, not our problem.”

Cummings was born Jan. 18, 1951. In grade school, a counselor told Cummings he was too slow to learn and spoke poorly, and would never fulfill his dream of becoming a lawyer.

“I was devastated,” Cummings told The Associated Press in 1996, shortly before winning his seat in Congress. “My whole life changed. I became very determined.”