A Brooklyn landlord has waived rent for hundreds of his tenants for the month of April.

Mario Salerno posted signs on the 18 buildings he owns throughout the borough letting tenants know they do not have to pay April’s rent, The New York Times reported

“My concern is everyone’s health,” Salerno told the Times.

“I told them just to look out for your neighbor and make sure that everyone has food on their table.” 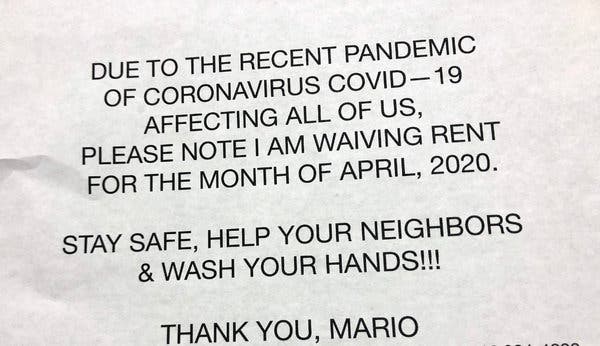 Salerno had not calculated how much he would be losing from not collecting rent on the 80 apartments, but it’s likely hundreds of thousands of dollars, the Times reported.

The 59-year-old owns around 80 apartments with 200 to 300 tenants in total in the Williamsburg and Greenpoint neighborhoods. He said he reached the decision when a number of tenants said they were having a hard time getting by amid the pandemic.

ment buildings, said he did not want renters to stress about their payment during the coronavirus pandemic.

“I’m really not concerned about the rent right now, I’m concerned about people’s health,” Salerno told Greenpointers.com. “Not only are we up against an epidemic, these poor people have no jobs and they’re worried about getting sick. I didn’t think it was much on a person like me, who God was good to, to help them all out.”

It has helped ease the stress for some tenants who are out of work because of the coronavirus.

Tenant Paul Gentile has lived four years in one of Salerno’s buildings. He works as an attorney but lost his job when the courthouses closed March 18.

“You don’t see that, especially in a landlord-tenant relationship in New York City,” Gentile told the Times. “He’s amazing.”

New York has become a hotspot for coronavirus, causing enormous amounts of job losses. According to The New York Times, surveys taken last month show that an estimated 40 percent of renters in the city couldn’t pay for April rent.