Daily Post
Home Africa Kenyan woman falls to her death while posing for a photo with...

Tragedy befell a Kenyan family Sunday when their daughter drowned while posing for a photo with her fiance during picnic.

Dorcas Jepkemoi Chumba, 31, fell into a dam at Chepkiit Waterfalls in Nandi County, Kenya, while trying to pose for a photo with her fiancé Benjamin Kazungu who was taking pictures of her.

According to local media reports, Benjamin was using Chumba’s phone to take pictures of her when the tragedy happened and she was immediately swept away by the turbulent sea as all efforts made by Benjamin to save her proved abortive.

Benjamin Kazungu said that he had taken his girlfriend out for a picnic at the famous falls to enjoy the breathtaking sight of the waterfall. He said that they had longed to hang out at the place as they both loved adventure but he did not know it would be the last time he would ever see his girlfriend.

The heartbroken man recounted how he was taking photos of his fiancé unaware that the photos would be the last memory he would have of her.

“I encountered the worst scene of my life. Seeing her sinking helplessly into the water and my effort proving futile breaks my heart even more,” said Kazungu. 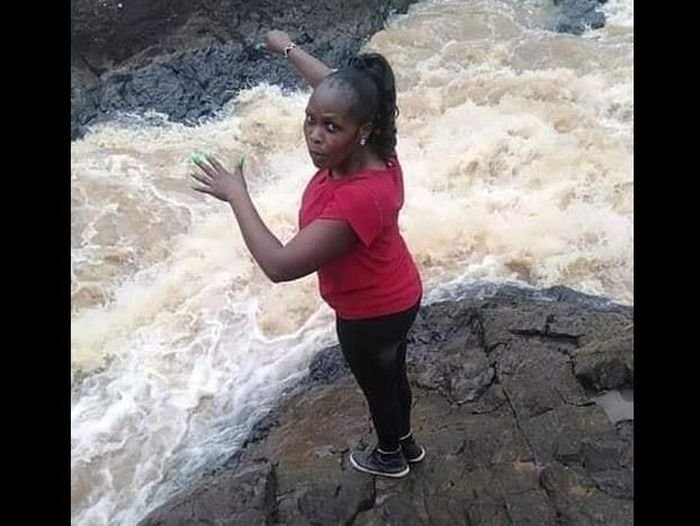 The family of the deceased have been camping at the falls since the sad incident with the hope of retrieving her body. Efforts by local divers to retrieve Dorcas’s body have been fruitless.

“We have been camping here since Sunday, local divers have been trying, but they are yet to get the body out,” said Jepkemoi’s brother Victor Kiptoo.

Kiptoo said his sister was very excited to go on the picnic with her lover before the tragic incident happened.

He appealed to county governments of Uasin Gishu and Nandi together with the national government to help the family of nine children to retrieve the body of their sister.

“Painful as it is, it has happened, and we accept it, what we are requesting is help to retrieve the body for burial,” said Kiptoo.