Ronald Mutandagayi, the Group Chief Executive Officer of Zimbabwe Bank (ZB) Financial Holdings Group, has taken a leave of absence after a viral video showed him assaulting his wife. The incident was reportedly captured by the couple’s 16-year-old daughter.

In the clip, Mutandagayi can be seen chasing his wife and striking her in the face. Mutandagayi’s wife  fell to the ground as she was hit in the face. It’s unclear what caused the fight and what happened next after the clip abruptly ended

The video sparked widespread outrage after it went viral on Social media. The board of the financial services group said in a statement it is currently considering  “appropriate action” to take against its GCEO following the disturbing footage.

“The board of directors of ZB Financial Holdings Limited has taken note of the social media communication relating to the Group Chief Executive Officer Mr. R. Mutandagayi which was published on the evening of 7 March 2021,” the banks said in a statement addressed to its customers.

“The matter in question is before the courts. In the meantime, Mr R. Mutandagayi has taken leave of absence from his duties while the board of directors of the group considers appropriate action on the matter.

“Stakeholders will be advised of any new developments as they arise.” 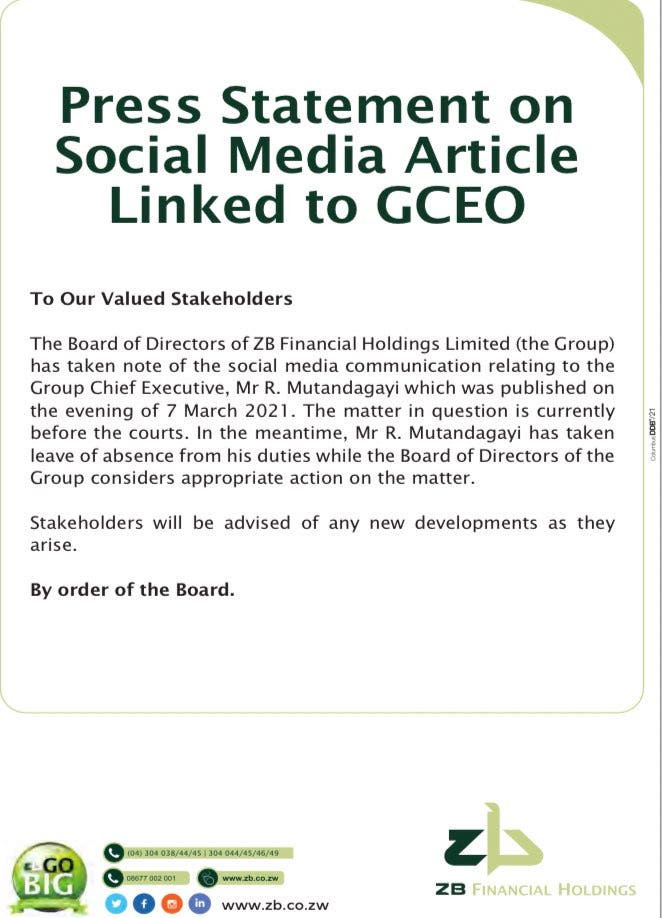 And while things are not looking good for the bank CEO, Mutandagayi reportedly said that the video is not telling the entire story. He claims to be defending himself from the attacks of his wife, alleging that he was assaulted for three days by his partner.

“The bona fides of such action is questionable. Further, it is regrettable that the video only shows a certain portion of the incident obviously meant to sell a certain narrative. Since the matter is currently pending before the courts, I shall let the law take its course,” Mutandagayi said in an official statement, according to the report.